Home / Blog / Why the Vintage Inspiration ?
Prev Next

Why the Vintage Inspiration ? 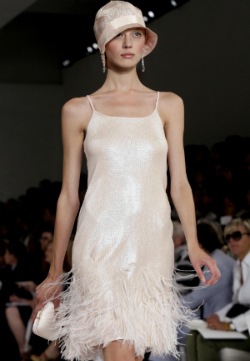 I am often asked why the vintage Inspiration ?

Rachel Hennessey nicely sums this up as if she was reading my mind, You simply need to take a good look around and see ideas being recycled over and over and again..

At surface level, the obsession with vintage clothing among young people may be baffling. In an age when newer is better in most industries, that many people are choosing to wear blatantly outdated apparel seems counter intuitive. It’s hard not to notice that older styles have made monumental comebacks in recent years. The wave of vintage-wearers over the past two decades proves that fashion isn’t like technology, transportation and pharmaceuticals in that newer isn’t necessarily more desirable. You don’t necessarily have to wear old to be a vintage lover, Wearing No More Laundry gives you best of both worlds. Vintage Inspired new clothing.
British philosopher Francis Bacon said, “Fashion is the only attempt to realize art in living forms and social intercourse”. This living form of art holds power – power to control a part of one’s image. A person can play a role, embody a story, or represent an era based on what he or she chooses to wear.
If you’re not a vintage-wearer, you may be wondering why everyone wouldn’t want to present him or her self as a modish work of living art by choosing to dress in the smartest, most chic outfits. While not everyone appreciates the vintage trend, it’s useful to understand some of the inspirations behind it. Before you label the next girl you see sporting an embroidered chiffon dress as a hipster or poser, consider the historical implications that the outfit holds.
Vintage, not to be confused with grunge (oversized sweaters and flannel shirts) brings us back a few decades further. The term vintage usually refers to garments from or inspired by the 1920s, although people do use it to describe anything old — up through the 1980s. Grunge refers to 90s trends, but there are commonalities between vintage and grunge. Both styles can be found at secondhand shops, the grunge at more economical prices, for obvious reasons. There is also something to be said about nostalgia, as wearing clothes from another period can be a sort of escape from contemporary stresses for twenty-first century Humans. But herein lays a major difference between the two: Most grunge-wearers can at least remember running around a playground in the 1990s, but most vintage-wearers didn’t live through the 1920s. One is a matter of celebrating one’s younger years, and the other celebrating points of historical pride.
That vintage style begins with, and keeps 1920s fashions at its core is no coincidence. In many respects, 1920s Western society represents the good old days of prosperity and fun to the average Joe (or Joanna) in 2015. Of course, the twenties weren’t flawless, but they were a relatively peaceful period between two storms. It was a decade of indulgence, rapid economic growth and change. The First World War was finally over. Cinema became an instant obsession for Everyone because films suddenly had sound. Vehicle ownership became more affordable and accessible, connecting people despite geographical distances. Urban environments flourished as the Modernist movement took shape. Artists and musicians began to blossom in new ways, surrounded by the cultural excitement of the Harlem Renaissance.
Perhaps most relevant to the topic of vintage clothing, women gained new rights and roles in society. Their new abilities to vote, work outside of the home and pursue life as more than just housewives, makes the 1920s a revolutionary decade for females Worldwide. Flappers and their followers seized and celebrated these freedoms by dressing differently, in what was considered to be rebellious attire. Women embraced head wreaths, cloche hats and bobbed cuts instead of traditionally acceptable hairstyles. Bold women wore whatever they wanted to – from garters with silk stockings to above-the-knee skirts and dresses, cigarettes in hands.
In the context of the World today, this period is not an irrelevant or forgotten one; in many respects, it’s the beginning of contemporary society. Coco Chanel, the queen of 1920s fashion, was also a goldmine of inspirational lifestyle quotes. She encouraged females to pursue freedoms – from choosing how they dressed to where they worked, serving as a living example of the success a go-getter attitude can bring. “The most courageous act is still to think for yourself. Aloud,” she said. How better to keep this spirit alive and this decade relevant than through the living art of fashion – a tasteful and graceful way to do so.